Let's put aside the argument whether viruses are alive or not for a second, and instead focus on one of their most important life-like characteristics: Evolution.

Evolution is one of those deceptively tricky topics that at first seems simple and intuitive. We can even boil it down into quips like survival of the fittest or, more accurately, descent with modification. The problem is that simple processes can give rise to incredibly complex and (yes I'm going to be that nerdy) beautiful patterns that challenge our intuition. This is one of the reasons why misconceptions of evolution are notorious challenges for high school and university education.

Recently some unpublished research made a big media splash because it claimed that a new and more contagious strain of SARS-CoV-2 (the virus that causes COVID-19) had been spreading. Thanks to an amazing community of scientists and science reporters, this unproven claim was quickly addressed.

One of my favorite articles is this piece in The Atlantic by the fantastic Ed Yong. A slightly more technical article by Jeremy Draghi and Brandon Ogbunu lays out the evolutionary flaws in the original study nicely.

While I was working on this walkthrough, a new analysis of 15,000 genomes came out. There's a great thread walking through the main findings, but here's one tweet that sums up the main result.

No single mutation having emerged recurrently to this day is significantly associated with increased transmission of #SARSCoV2. Instead, all those mutations are neutral or deleterious to the virus' transmission, some significantly so.
(3/5)https://t.co/NxIlUcFDE9 pic.twitter.com/z5p6z26jKl

Understanding how pathogens evolve during a pandemic is definitely not a common skill, even among biologists. It's especially challenging since both the spread and the evolution of a disease are complex processes that resist being put into small or easily-understood packages.

In this walkthrough, we'll explore how Neutral mutations, which have no effect on how a disease spreads, can create patterns that look as if a more infectious strain is emerging.

If you missed the last walkthroughs building up the Infectious Matter simulator, I recommend checking them out first. Here's a link to the first and second. Otherwise, keep scrolling!

We'll start by coloring all of the susceptible agents in shades of gray to black. As the pathogen spreads and agents become infected, you'll see them turn blue. Now we can use color to visualize the differences in pathogens spreading through the world.

When a pathogen (like a virus) is replicating within its host, mutations are constantly produced by chance. Most of the time these mutations are harmful to the pathogen (or Deleterious), sometimes they have no effect at all (Neutral), and very rarely they improve the pathogen's fitness and are considered Beneficial.

Here, we'll focus on Neutral mutations that have no effect on a pathogen's biological properties. As you'll see, even when mutations have no effect, the patterns of pathogen spread can look a lot like a new super strain has evolved.

We'll visualize these neutral mutations by changing the color of the infected agent.

The light blue color you've been watching spread through the world is really just an arbitrary starting position in this color scale.

I haven't turned on pathogen mutations yet, so every new infected agent has the same color. In other words, there is only one Genotype of the pathogen right now - the light blue one.

The term Genotype lets us refer to groups of organisms that share the same set of mutations. We don't call these different Strains because none of these mutations affect how the pathogen behaves. Remember, we're only simulating neutral mutations.

I've reset the simulation and turned on mutations. Right now the mutation probability is set to 0.25. That means on average 1 out of 4 infections will produce a new pathogen genotype (and a new color)!

I've also brought back the contact graph, where each node represents an agent, and an edge indicates that those two agents had contact within the past 7 days of simulation time. The nodes in the contact graph will also change colors so you can see the spread of the mutant pathogens!

The other ingredient of evolution 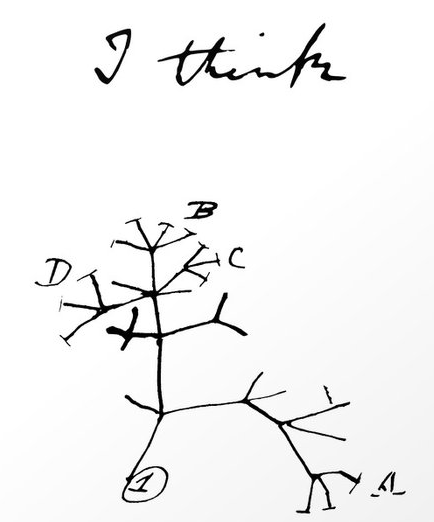 We've added color to help us see the variation between pathogen genotypes, but the Relationship between genotypes is a crucial part of the evolutionary picture.

Charles Darwin sketched one of the most intuitive ways of seeing these relationships when he was working out the evolutionary process for himself in 1837. The image above is from one of his early notebooks.

We're going to build up a similar visualization of the Phylogenetic Network for our evolving pathogen!

Every time a new infection occurs, we'll add a node to the phylogenetic network and color it based on the genotype of the new pathogen. We'll connect this Child genotype node to it's Parent genotype in the network by drawing an edge between the two.

If there are no mutations, then every new node we add is connected to the original pathogen genotype. What you would expect to see in this case is a kind of star network. In order to escape this star, we need mutations to create new genotypes!

With mutations, we get more interesting networks that depict the genetic relationships between pathogens! You might even see a new genotype spreading, like the pathogens pictured above with dark blue nodes.

Let's turn the Phylogenetic Network on in our simulation now.

It's (still) a small world

Bringing back the controls

Like in the Small World walkthrough, there is a combination of local and global movement between locations. You can control the number of these visitors using the sliders below.

I've added a new slider that lets you turn up or down the probability that the pathogen mutates as it spreads between agents.

Not as scary as they sound...

You probably noticed that some of the nodes were more active than others in the phylogenetic network. The active ones ended up in large clumps. Those were the lucky genotypes that by chance spread to more locations and produced more offspring. However, these genotypes are functionally identical to each other. In microbiology lingo, they different genotypes of the same Strain.

Be sure to experiment with how the amount of local and global movement affects the spread of pathogen mutants. For example, what happens at the two extremes of only local or only global movement? Remember, this is a stochastic simulation, so you'll have to run it a few times to get a sense of the range of possible outcomes.

It's also a lot of fun to play with the mutation probability, and watch how it affects the phylogenetic network!

In real life pandemics, making sense of how a pathogen is spreading through the world is challenging. That's especially true during the early phases where the proper infrastructure to test and track infections is still being built. But, these kinds of neutral mutations accumulating in pathogen genotypes can actually be helpful! Think about how having a phylogenetic network of pathogens can help you figure out when and where particular outbreaks were started. That might have to be the topic of a future walkthrough!

Trevor Bedford is one these real life pathogen trackers, and he recently posted a revision to some of his herculean efforts on Twitter:

On Feb 29, using the genetic sequence of the first community case of #COVID19 in Washington State, I made the claim that the Washington State outbreak descended directly from the Jan 15 arrival of the WA1 case with direct travel history to Wuhan. 1/18https://t.co/8wWxtiotE3

It's easy to imagine seeing these patterns in real life and attributing them to functional adaptations. However, in the case of SARS-CoV-2, there's really no evidence that we're facing multiple strains. Of course, that might change. We're probably all getting used to feeling like things we learned a week ago are already outdated. When science and science reporting moves at the speed of a pandemic, we're all going to have to learn how to pivot quickly.

But for now, we can get back to arguing about whether viruses are alive or not.

Although there is currently only one strain of SARS-CoV-2, the strain we have is particularly good at spreading! It's important that you keep doing your part to reduce transmission especially now that lockdown restrictions are being lifted. That includes staying home as much as you can, wearing masks while in public, keeping at least 6 feet of distance between people, and washing your hands often.